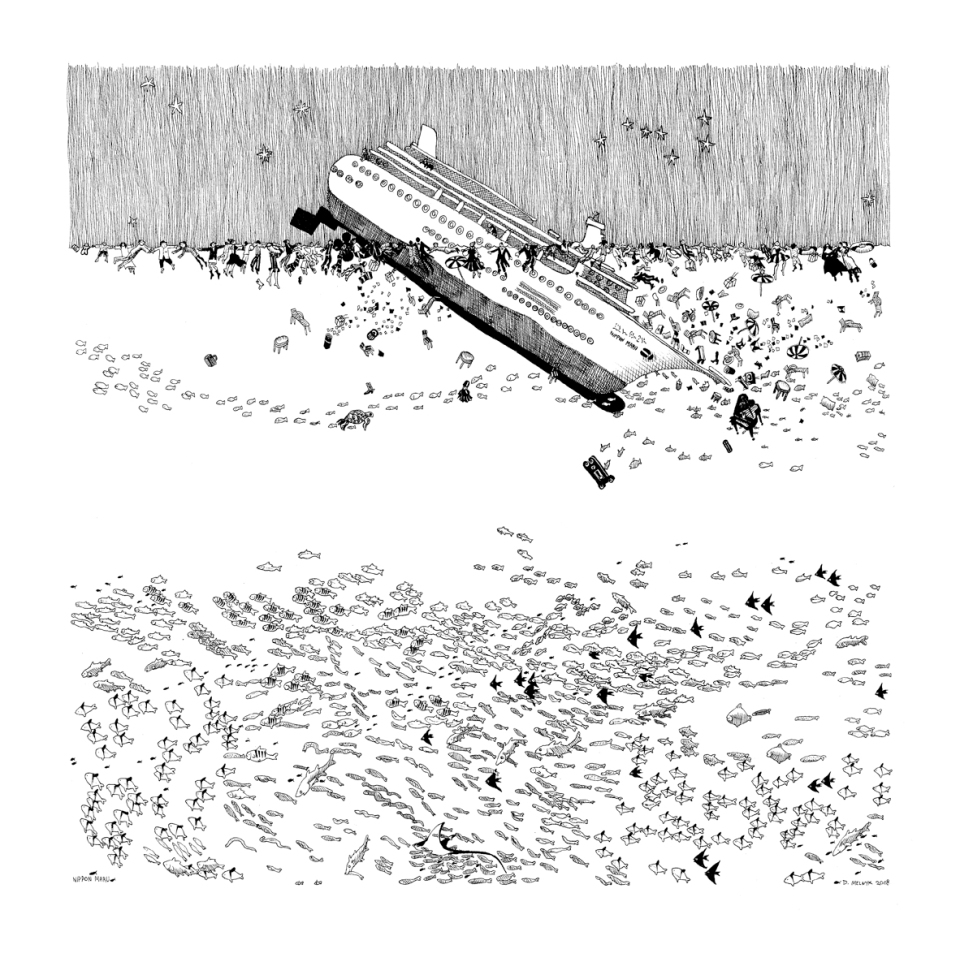 Doug Melnyk is a multidisciplinary artist who works in drawing, collage, video and performance, often in collaboration. He is the author of three books (Naked Croquet, Doctor Meist and Doug Melnyk’s Fruits), and his video work can be found in a number of public collections including the Winnipeg Art Gallery, the National Gallery of Canada and New York’s Museum of Modern Art. Recent visual art projects, such as Adam & Steve (Forest City Gallery, London, Ontario and AKA Gallery, Saskatoon) attempt to situate queer sexuality within both Christian and evolutionary discourses. Following in the spirit of Doug Melnyk’s Fruits (As We Try And Sleep Press, 2005), is the newest venture into publication, The Story of Roy, a zine produced by Ho Tam for his series: XXX (xxx.zines.com)

Doug has been working with performer Ian Mozdzen (Out Of Line Theatre) since 2009, developing a number of performance works (Monopoly Man Pit, Dalnavert Copperfield, Hollywood Hen Pit). Another ongoing project is Nippon Maru, an animated video being developed with Larry Glawson (computer animation) and Cathy Nosaty (music and audio). Nippon Maru is an animation derived from Melnyk’s existing drawings, silkscreens and cut-paper work, and tells the story of a small cruise ship that flounders and sinks in tropical waters, and follows the fates of her unlucky passengers, a number of whom exist briefly on a small island.

“In my practice, I have often worked with artists from differing disciplines, and I have worked with both Larry and Cathy for over twenty years, collaborating on performance, video, and photography. Along with other collaborators, we performed in the first Winnipeg Fringe Festival with Gorilla (Jack and Alexis Butler, John McCulloch, Maggie Nagle, Cathy Nosaty, Martha Little) subsequently performing at the Edinburgh Fringe, Covent Garden, London Ontario, Regina, etc. and with a slightly changed troupe (Richard Brown, Larry Glawson, Maggie Nagle, Cathy Nosaty), performed Summertime at the Winnipeg Fringe, Winnipeg Art Gallery, New York’s Hunter College MFA program, etc. In these situations, our creative group consisted of artists with backgrounds in visual art, writing, acting, photography, music and other disciplines. Our range of references was diverse and eclectic, as was the language we used to communicate with each other. The Mozdzen/Melnyk team continues this approach of synthesizing many influences, working to find a common creative language to deal with ideas that originate in existing literature, film and contemporary art.”